Introduction: With the increasing caesarean delivery rates, the risk of caesarean scar pregnancy is increasing. However, owing to its rarity, it poses as a diagnostic and therapeutic dilemma for the obstetrician.

Case report: A 33 year old lady G3P1L1A1 at 8 weeks 3 days period of gestation was diagnosed as a case of viable caesarean scar pregnancy. She was treated with intracardiac potassium chloride, and intragestational sac and placental Methotrexate injection. She was followed up and at 12 weeks post treatment serum β HCG normalized and endometrial cavity was empty on transvaginal sonography.

Conclusion: Diagnosis of caesarean scar pregnancy is difficult, but transvaginal sonography and colour flow Doppler may be helpful. Though the best and standard management is still unclear for this condition, the use of intracardiac KCl, and intra sac and placental Methotrexate can be considered in cases of viable caesarean scar pregnancy.

With the increasing caesarean delivery rates, apart from the risk of pathologically adherent placenta, the risk of another entity of implantation of gestational sac into the myometrium of hysterotomy scar, called as caesarean scar pregnancy is increasing[1]. The reported incidence is 1/1800 to 1/2216 of all caesarean deliveries[2]. The case reported here describes the use of intracardiac Potassium chloride, and intragestational sac and placental Methotrexate injection in a viable Caesarean scar pregnancy and its follow up.

A 33 year old lady, G3P1L1A1 came to casualty at 8 weeks 3 days period of gestation with a transabdominal sonography reporting a suspected scar pregnancy. She had history of one episode of sudden onset dull aching pain in lower abdomen which subsided on its own. She had no other complaints. She had history of abortifacient intake 4 days before. Her obstetric history included a full term uneventful caesarean section 12 years back and a spontaneous abortion 3 years back at 1½ months amenorrhea not followed by evacuation.

On admission, her general physical and systemic examination was normal. On per vaginal examination, uterus was 8 weeks size, anteverted, soft, mobile and bilateral fornices were free and non-tender. Her serum βHCG was 98,280 mIU/ml. A diagnosis of caesarean scar pregnancy was made on the basis of TVS showing-

1) Gestational sac of 3.3 × 3.8 × 3.2 cm corresponding to 10+2 weeks gestation with cardiac activity in the lower uterine segment at the site of previous caesarean scar (Figure 1), 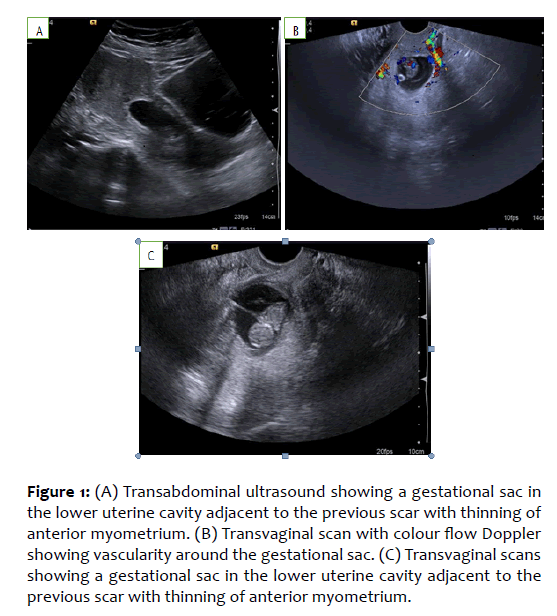 2) Thin anterior myometrium (3 mm thickness) with a beak like projection from the sac into the myometrium,

3) Increased vascularity in the adjoining myometrium.

Initially, injection Methotrexate 50 mg intramuscularly was administered and TVS on the fourth day showed a gestational sac of 10 weeks with cardiac activity. After 3 days, TVS still showed a viable pregnancy. So under TVS guidance, 1.1 ml of 2 mmol/ml of potassium chloride was instilled into the fetal heart through a 20 gauge ovum aspiration needle. Injection Methotrexate 25 mg was instilled into the amniotic sac and placenta each. The fetus was observed for 5 minutes for confirming absence of cardiac activity. The patient was discharged on day 5th without complications and advised to follow up with weekly serum β HCG reports.

Caesarean scar pregnancy, though rare, is a potentially life threatening condition. The exact cause of this entity has not been understood. However, many hypotheses have been proposed and one of them is that the conceptus enters into the myometrium through a microscopic tract between the prior caesarean scar and the endometrial canal[3]. Early detection and treatment is necessary to avoid complications like uterine rupture, maternal mortality or adverse impacts on future fertility due to hysterectomy. Diagnosis is difficult but transvaginal sonography and colour flow Doppler using the following criteria may be helpful[1].

• A closed and empty cervical canal

• The presence of prominent or rich vascular pattern in the area of caesarean scar.